The week of August 2-8 takes us from Lunar Day 25 to Day 1. This week we will highlight the Aristarchus Plateau and moon crater Aristarchus. 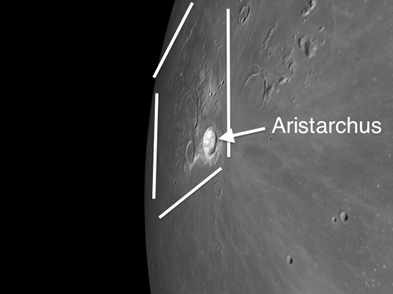 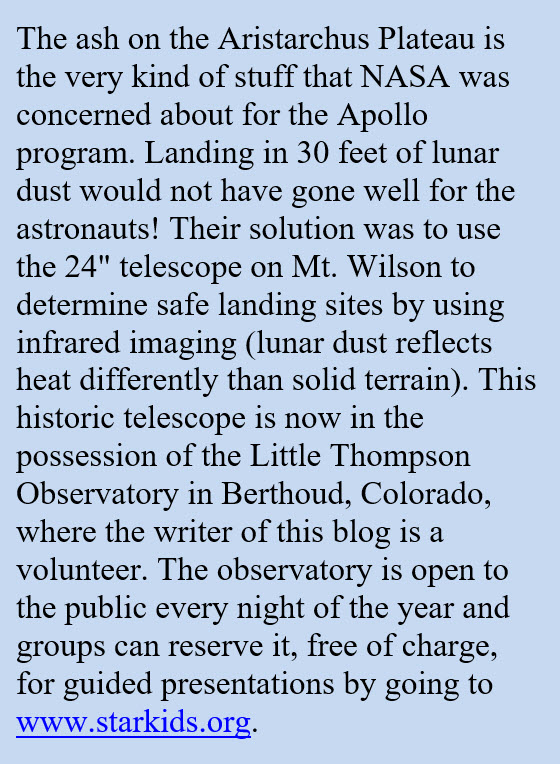 Aristarchus Plateau: [NW/G4-5] This plateau is a diamond-shaped feature with straight sides measuring 100 x 125 miles and is over a mile higher than the surrounding mare areas. It is conjectured that the plateau was uplifted because of the pressures exerted by underground magma. It is an unusual object not only because of its straight sides but because it is covered by a mantle of pink-colored pyroclastic ash 30 to 100 feet thick. The Plateau has attracted the attention of NASA as an area for lunar colonization because hydrogen and oxygen can be extracted from the ash, providing fuel, water, and breathable air.
The reddish color of the plateau is distinctive and sets it apart from the gray of the surrounding terrain. (Other observers see greenish or yellowish tones. What do you see?)

Aristarchus: [NW/G5] Aristarchus is the brightest spot on the Moon, a phenomenon that you observed on Day 3 when you may have noticed that you could see it even on the dark portion of the Moon! It is so bright that Sir William Herschel mistook it for an erupting volcano1. Try to draw the dark radial bands that climb straight up the west wall of Aristarchus. Some observers have reported up to nine bands. How many can you see? Do the bands creep up the wall and spill over onto the lunar terrain beyond?

Latest posts by Andrew Planck (see all)
Moon Crater Aristarchus: Brightest Spot on the Moon
Tagged on: craters on the moon    lunar dates    lunar days    objects on the moon