The week of October 8-14 takes us from Day 20 through Day 5. This week we will highlight the craters Peirce & Picard and the wrinkle ridge Dorsum Oppel, viewable on Friday evening. 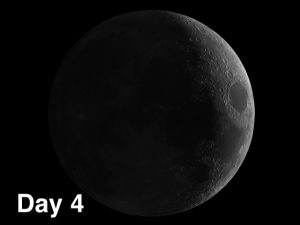 Peirce & Picard: [NE/H15] The two largest intact craters on Mare Crisium are Peirce and Picard. They are only about 12 miles in diameter by 1 mile deep and will require 75x – 100x to see them. They are located on a more-or-less north-south line about 30 miles in from the western shore of Crisium (Peirce is the northernmost). The lava that covered Crisium stopped flowing before these craters formed. You should easily be able to spot Swift, a small seven-mile crater just eight miles to the north of Peirce. 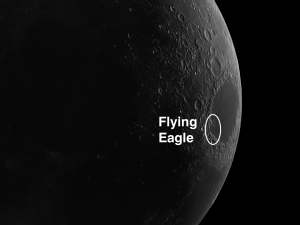 There is also a more substantial ridge that connects the flooded crater Yerkes with the smaller Yerkes E, 15 miles to its northwest (unnamed on the Field Map). Under a low Sun, when the terminator is around 52°-55°E, this ridge will combine with the SW rim of Yerkes to look remarkably like the silhouette of a bird in flight. It has consequently been nicknamed the Flying Eagle. (This feature may be seen to better advantage on Day 17 when the Sun is setting.)

OF ADDITIONAL INTEREST IN SPACE AND ON THE MOON:

There is a persistent belief that water swirls down a drain clockwise in the northern hemisphere and counterclockwise in the southern. This is a myth and is perpetuated by fraudulent “demonstrations” done just a few feet north and south of the actual equator. A man fills a squarish container with water, walks a few feet north of the equator, pulls a plug, and the water drains out in a clockwise swirl. Then he walks a few feet south of the equator, pulls the plug, and, behold, the water drains out counterclockwise. It is a very convincing demonstration. The secret is that when he walks north, he turns to the right to face his audience. Because the container is squarish, it adds a slight clockwise motion to the water which then obligingly drains clockwise. When he walks south, he turns to the left to face his audience and, behold, the water drains counterclockwise.