The week of December 16-22 takes us from Day 19 to Day 26. This week we will highlight Mare Vaporum, viewable early Wednesday morning, and the Winter Solstice. 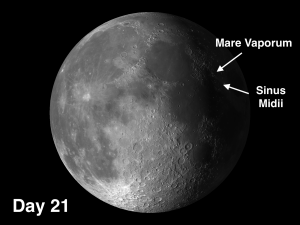 Mare Vaporum: [NE/H10; L=4°E] Notice how there are finger-like projections extending from the back side of the Apennines into Mare Vaporum. It is not coincidental that these extensions point back to Mare Imbrium as they are part of the ejecta that was thrown out during the initial impact. (This also makes the Sea of Vapors considerably younger than Mare Imbrium.) Notice how the lava seas have flowed smoothly into the bays and fjords of the Apennine Mountains. This is a clear indication that the Apennines were in place long before the lava seas flowed into the Mare Vaporum depression.

Take a comparative look at Mare Vaporum and Sinus Medii. It should be obvious which is younger. What do you think?1

The Winter Solstice will occur on Saturday, December 21st. It is the shortest day of the year in the Northern Hemisphere, and, historically, is a day of great importance. Ancient peoples recognized that if the movement of the Sun towards the south did not cease and reverse itself, they would be doomed, so one of the most important functions of the chief priests of ancient cultures was to predict when the solstice would happen, and it was a day of great celebration. In one pagan culture, early Roman Catholic priests were astonished to learn that centuries before the birth of Jesus, the chief priest would emerge on the day of the solstice and announce, “The Virgin hath brought forth, let us rejoice!” They were referring to the virgin of the skies bringing forth a new born sun, not the Virgin Mary, but the Roman Catholic priests were understandably perplexed. One interesting spin on this announcement was, “The devil hath quite surpassed himself in that he hath reversed the normal sequence of events.”