The week of October 11-17 takes us from Day 6 to Day 12. This week we will highlight the moon craters Eudoxus and Linné, viewable on Monday evening. 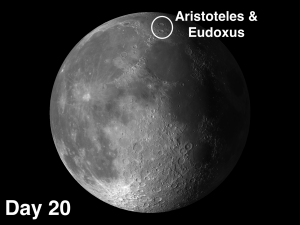 Eudoxus1: [NE/E11; L=16°E] Both Eudoxus and Aristoteles to its north are wonderfully complex craters with terraced walls. Look closely at the pair. It’s subtle, but can you see any features that would suggest which is older?2 Just to the northeast of Eudoxus are three simple craters. Can you tell if their floors are bowl-shaped or flat?

Linné: [NE/G11; L=12°E] Linné is a simple, relatively young crater with an interesting history. It is only 1.5 miles in diameter (about 1.3 arc-seconds at the average distance of the Moon), which makes it about twice the size of Meteor Crater in Arizona. Linné is surrounded by very light-colored material, and, because its appearance changes so much with different angles of illumination, this was once taken as evidence that the Moon was not a totally dead place. In 1866 it was erroneously reported that Linné had vanished. The idea caught on and was cited as proof that the Moon was still geologically active. Observe Linné under different lighting angles and see if you can convince yourself (if you didn’t know better) that Linné could disappear.

1Eudoxus: (c. 410-350 BCE) Greek astronomer and student of Plato who created a system of 27 spheres to account for the movement of the celestial bodies. This model of the solar system, in various forms and modifications (most famously by Ptolemy) persisted until Copernicus in the 1500s.
2The south wall of Aristoteles has been damaged and pushed in by debris that was ejected from the impact that created Eudoxus.