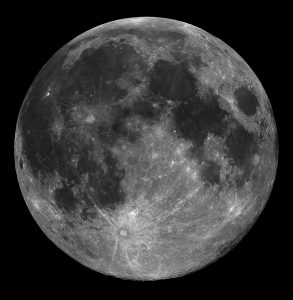 Full moon generally occurs around the end of Day 14, but this can vary by up to 12 hours, so full moon may happen on Day 15. To be strictly technical, we never actually see a full moon. Such an object must be exactly opposite the Sun from the Earth; it would therefore be in the Earth’s shadow and we would be in the grips of a lunar eclipse. What we call a full moon must, of necessity, be placed above or below the Earth’s shadow (making it slightly less than full). The result is that some craters will always show a bit of shadow relief. Take a look at the Moon on Monday evening and decide whether it is sailing above or below the Earth’s shadow. The most eye-catching features of the full moon are the systems of rays surrounding Tycho, Copernicus, and Kepler.

Look at the “straits” between Mare Imbrium and Oceanus Procellarum. Can you see that the color of the lava in both areas is different? This is a clear indication that the lava flows came from different sources at different times. Also notice the darker ring surrounding Mare Serenitatis, particularly along the eastern and southern shores. It is more conspicuous now that we are at full moon. After the Serenity Basin formed, it was covered by darker titanium-rich lava that also caused the basin to sink and open up arcuate cracks along the southern shore. A second, lighter colored lava flow appeared much later, but because this flow did not completely cover the floor of Serenity, it left the mare with a dark collar.

OF ADDITIONAL INTEREST IN SPACE THE WEEK OF SEPTEMBER 24-30:

Around 12:30am. EDT on Friday morning you can catch the Moon occulting 4th magnitude Mu Ceti behind its N.W. quadrant. It will emerge around 1:50am from the dark crescent on the eastern limb, giving you an idea of the time it takes the Moon to actually traverse its own diameter through space–as opposed to its apparent motion through the sky due to the Earth’s rotation when the Moon will appear to traverse its own diameter in a surprisingly short two minutes! This is easy to verify. Just take a chair out and sit in a place where you can line up the leading edge of the Moon with an overhead electrical wire. Sit very still with your hand on a stop watch button. When the Moon touches the wire, start the stop watch. When it clears the wire, stop it. Make sure you don’t move your head to look at the watch, just do it by feel.