The week of October 31 – November 6 takes us from Lunar Day 7 to Day 13. This week we will highlight the Apennine Mountain range, located on the Field Map at [NW/G9] and viewable Tuesday evening, and Rupes Recta, the Straight Wall, viewable Wednesday evening.

Montes Apenninus: The Apennine Mountain Range [NW/G9] is the most spectacular feature on the Moon and was formed as a direct result of the impact that created the Imbrium basin nearly four billion years ago. Mountain ranges on the Earth take millions of years to form. The magnificent ranges that surround Mare Imbrium were created in a matter of minutes! They resulted from the shock waves that exploded out from the original Imbrium impact. The Apennines stretch out over 370 miles and include more than 3,000 peaks. The highest peak in this range is Mons Huygens which stretches, from its base to its top, to an incredible 18,000 feet (providing the best skiing in the solar system!) 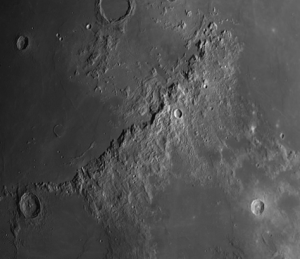 Back off and scan the whole area for telltale formations that seem to radiate from the center of Imbrium (don’t forget to check the back side of the Apennines). These radial features resulted from debris that was blown out from the original impact.

Straight Wall: (Rupes Recta): [SW/M9] Two of the best-known faults on the Moon are Rupes Recta and Rupes Cauchy [Day 4]. They are fascinating to explore and they share remarkably similar neighborhoods: Both features are paralleled by a nearby rille, and in each case, an intervening small crater separates the rille and the fault.

Straight Wall is the showpiece lunar fault line and can be seen clearly in the smallest telescopes. It is 70 miles long and 1,300 feet high. If you view it either in the early morning on Day 8, or at lunar sunset around Day 22, you will see clear evidence that Straight Wall is an enormous fault line where the terrain to its west has fallen away. In the morning, the rising sun casts a thick black shadow over the lava plain to the west. At sunset two weeks later, the exposed slope of the fault is brightly illuminated.

On Friday Jupiter will be 2° north of the Moon, and the Taurid meteor shower will peak on Saturday.