The week of September 30 – October 6 to takes us from Day 2 to Day 8. This week we will highlight the craters Dawes, Moltke and Arago, viewable on Friday evening, Day 6. 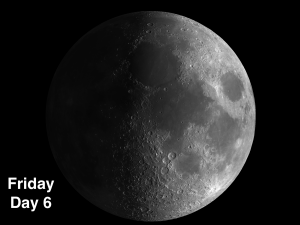 Moltke: [NE/K12] Just south of the Apollo 11 site is Moltke (4 miles in diameter—about 4 arc-seconds), a perfect example of a simple crater with a smooth bowl.

Arago: [NE/J12] About 50 miles from the western shore of Tranquillity you will find the crater Arago (16 mi.). This is an unusual crater. In the place of a central peak you will see a substantial ridge that extends from the center of Arago’s floor to its northern rim. The evidence suggests that there was a significant collapse of rim material which simply merged with the central peak.

Friday, October 4th, marks the 62nd anniversary of Sputnik, the first successful launching of a satellite into outer space by the Soviet Union in 1957.