The week of March 29 – April 4 takes us from Lunar Day 16 to Day 23. This week we will highlight a feature called The Great Eastern Chain, located in the SE quadrant of the Moon bordering Mare Fecunditatis. 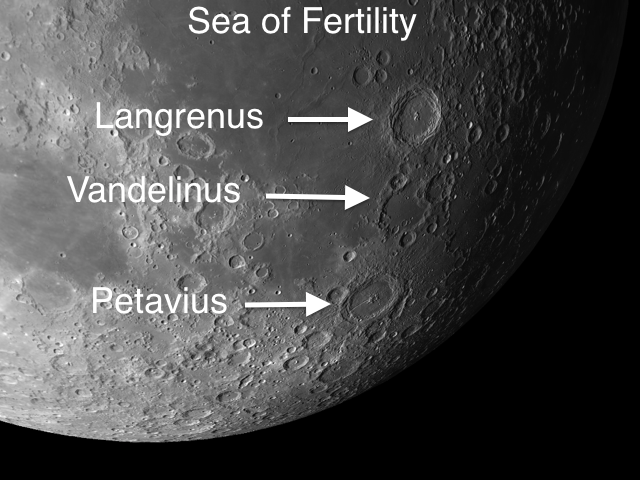 The Great Eastern Chain: [SE/K-N16] There is a conspicuous chain of large craters, at one time referred to as the Great Western Chain1, which closely hugs the same meridian near the eastern limb (i.e., the rim of the visible disk) of the Moon. They start on the southeastern shore of the Sea of Fertility (Mare Fecunditatis) and continue south. The chain consists of Langrenus, Vendelinus, Petavius, and Furnerius. Although this unusual alignment is coincidental, it was once posited as evidence to support the endogenic theory of crater formation2. Tonight you should be able to see them more clearly than you did on Day 3.

Of the first two craters, Langrenus and Vendelinus, one is older than the other and appeared before the lava flows started. Even if you have a small telescope, there is much detail in the interior and on the outer ramparts to keep you busy.

Langrenus & Vendelinus: [K-L16] These craters are the first two segments of the Great Eastern Chain. Langrenus and Vendelinus are two large 90-mi. craters located on the southeast shore of Fertility. One is considerably older than the other and appeared before the lava flows started. It should be easy for you to decide which is which3.

The terraces and central peaks of Langrenus will have emerged from the shadows, and tonight the crater is a beautiful sight. Even if you have a small telescope, there is much detail in the interior and on the outer ramparts to keep you busy.

The younger crater Lamé intrudes on Vendelinus on its NE rim, and it is appropriately smaller. However, notice that Lamé, in turn, overlaps two smaller unnamed craters on its S.W. rim. This is unusual in that intruding craters are almost always smaller than the craters they impact on. (However, Lamé is appropriately overlapped by four smaller intruders on its eastern rim.)

Petavius: [SE/M16] This is one of the most fascinating craters on the Moon. It is an example of a floor-fractured crater (FFC), a type of crater that has been modified by later volcanism, uplift, and consequent fracturing. The floor of Petavius is nearly 1,000 feet higher near its center than around the edge! Is the curvature of the lunar surface apparent to you on its floor? Turbulence and volcanic upheaval from below split the central mountain (which rises to nearly one mile above the floor) and formed the rilles.

Furnerius: [SE/N16] This is the last of the craters that make up the Great Eastern Chain and it is very old, having formed before the impact that created the Nectaris basin 3.9 billion years ago. Although the walls have been battered down and show their age, there are still many complexities remaining which will reward careful observation. There are several craterlets of varying sizes on the floor of Furnerius, including a 30-mile rille extending from the north rim toward the southeast. Patrick Moore reports that there are fourteen large craters and several craterlets in its interior. (A more reasonable assessment would be there is one large crater and several craterlets.) Make a rough sketch of how many you can see, then come back next month (and on Day 3) to see if you can add to the count. Can you match Patrick Moore’s observing skills?

1 In 1961 the IAU reversed the east-west directions on the Moon.

3 Because it is so heavily worn and has had time to acquire many overlapping smaller craters, Vendelinus is the older.