The week of August 10-16 takes us from Lunar Day 22 to Day 27. This week we will highlight the crater Bullialdus, visible on Wednesday morning, and the Perseid meteor shower. 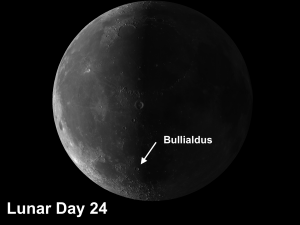 Bullialdus: If you recall what Tycho looked like yesterday morning, Bullialdus shares much of the same morphology in spite of being only half the size: a compound central mountain, eye-catching terraces, a flat floor, a thick ejecta blanket, and material in the immediate environs that rained back down after impact. There are so many interesting features that it is surprising that Bullialdus gets such short shrift. It is the most conspicuous crater on Mare Nubium, an area that offers several conversation pieces. Examine the inner terraces for tiny impact craters and evidence of landslides. Can you make out an intriguing raised ridge running from the central mountains southeast to the base of the terraces on the wall? Over the next few nights, observe how the appearance of the central mountains changes substantially. 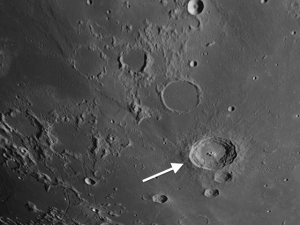 Look carefully at the shared terrain between Bullialdus and Bullialdus A immediately to its south. Other than the fact that Bullialdus A is smaller, can you see any evidence that tells you which crater is older?

The Perseid meteor shower peaks on Wednesday, August 12. Look northeast after midnight. It is one of the brighter meteor showers of the year. You can expect to see 60-100 meteors per hour from a dark site.