The week of March 5-11 takes us from Day 19 to Day 24. This week we will highlight Rima Hadley (Hadley Rille) viewable on Thursday evening.

Rima Hadley: [NE/G10] This feature formed as lava from a nearby volcanic vent flowed onto the plains of Palus Putredinus1. The lava cut a deep channel that is wide enough to be seen today in amateur telescopes. It is 75 miles long, one mile wide, and 1,300 feet deep. The sickle-shaped volcanic vent from which the lava spewed can be briefly glimpsed each month. It lies perpendicular to the southwest end of the rille. (Look for it when the terminator is very close, as will be the case Thursday evening.) 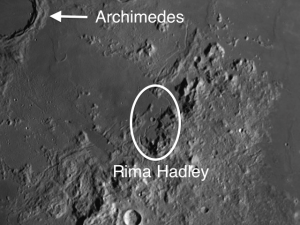 Astronauts made important discoveries at Hadley Rille. Scientists wanted to get better information on the depth of the Imbrium basin and its age and composition. Hadley Rille afforded the Apollo 15 astronauts an opportunity to examine a deep cross section of the basin. They brought back rock samples that proved that the Apennines were formed as a direct result of the impact that blasted out Mare Imbrium 3.9 billion years ago.

Thursday evening should afford a good opportunity to view Hadley Rille. Its width of only one mile would subtend an angle of less than an arc-second, but lines are easier to see than points. You would normally need a 5-inch telescope and good conditions to see this feature. What size instrument can you see it with?

OF ADDITIONAL INTEREST ON THE MOON THE WEEK OF MARCH 5-11:

If you have access to dark skies and live in mid-northern latitudes, starting Wednesday look for the zodiacal light, a softly glowing band of light stretching along the ecliptic. Start looking just at the end of twilight. What you’re seeing is sunlight glancing off interplanetary dust which orbits the Sun near the ecliptic plane. Although it’s sometimes a challenge to see the zodiacal light, believe it or not, from interstellar distances this would be the solar system’s most prominent feature, next to the Sun itself!

1 Which may be roughly translated as “the Marsh of Great Stinkiness.” (What a vacation spot!)